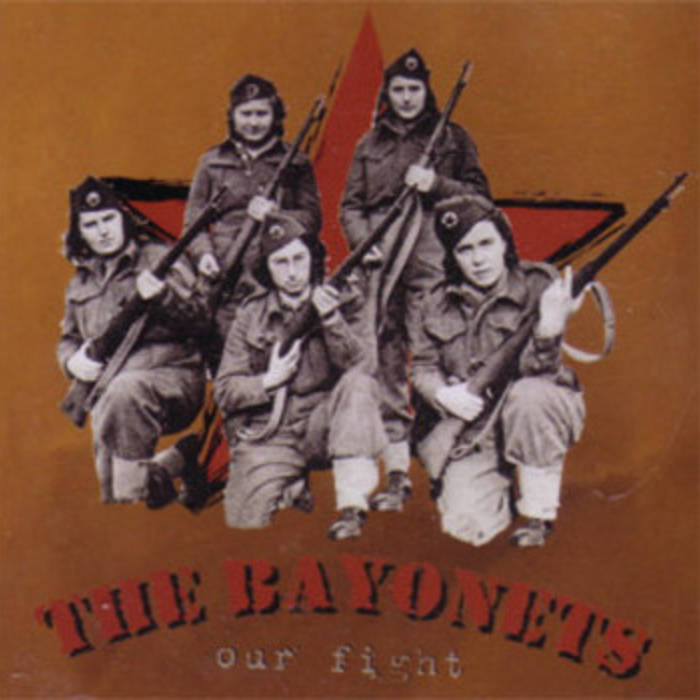 The Bayonets, streetpunk band based in Novi Sad, Serbia & Montenegro (ex-Yugoslavia). The story began in the summer of 2004. It started out as a joke, but few weeks later, after we were joined by one more guitarist (Smuk), things in the band started to move in a bit more serious way. After only three rehearsals in that line up, we went in studio to record our first song "Our Fight". The positive reactions that we've received from local punk & oi! fans, but also from many people abroad, were sign for us to move are asses. We practiced very often, made new songs... Of course, all that work would lose any sense without live performances. We played our debut gig on December the 3rd with Italian band Inerdzia, in packed local club "Enter". In the same month, by the end of 2004, we visited studio again. The band recorded 5 songs that we put on promo cd. Many copies have been sent to foreign labels. After some failed plans with few of them, that material is still unreleased. But that didn't stop us from playing gigs frequently. Because of shows in our area (Novi Sad and province Vojvodina), but also in Croatia, that we played with bands like Heros & Zeros, Ringispil, Red Union, Shoplifters, Lockdown, Grupa tvog zivota, Diverzija etc, The Bayonets became known as band that knows how to share the energy with the crowd. The main inspiration for The Bayonets are many old UK punk & oi! bands from end of 70's/ first years of 80's, but we are also strongly influenced by today's streetpunk scene from Europe and US. And probably, our guitar solos will remind you of some punk'n'roll bands. We don't see ourselves as a political band, although many people see us that way. We sing about various topics from everyday life (social problems, punk scene, fun, personal...). But we are not ashamed of our stance which is strongly antifascist. Our opinion is that there should be no place in punk scene for things like bigotry, conservatism, racism, xenophobia etc. Of course, we don't attack these things within the scene only, we criticize them as a threat to society too. Before the end, we would like to mention our close relation with local ska band Ringispil, since we share 3 members. Check out their page at www.ringispil.com. OK people, that is all for now. Feel free to contact us. We'll try to inform you about are activities in the future. Keep the faith, fight intolerance & stay free! Best wishes from The Bayonets.

PASIDARYK PATS it's nonprofit label,distro & booking which was decided to set up on purpose to introduce to the world with different kind of music nor traditional music. Our aim is to release qualitative records of present & upcoming punk bands.
PASIDARYK PATS does not only music's publishing/trade ,but also distribution of the other labels and arrangements of gigs... ... more

Bandcamp Daily  your guide to the world of Bandcamp

Featuring Gary Bartz, 5 years of Rhythm Section Intl and an LP of the week by Nicolas Jaar